A common problem with people when they drink is that they want everyone within a 4.79 meter radius of them to drink too. If you happen to be in such company and are not the drinking types, then be prepared for a 10 minute lecture on the health benefits of drinking alcohol followed by a 5 minute brief on how it relaxes the body mind and soul. To check if you understood the concept, the offer to drink would be extended to you every 5 minutes in between other discussions till they are in their senses. Once they start loosing that, you'll be tried in the court of law for the crime of not drinking and making them look like irresponsible citizens.

So this time, i gave in at the fifth minute. A beer and a few burps seemed like a more energy saving option. We were in a hotel room, 11 PM, the three of us, after a very very long day. There are some trips that you can never forget in your life because of certain incidents that happened. May be an accident, or a close escape, or getting into trouble with the cops, or sharing the passenger seat with your crush who friendzoned you at the end of the trip. There were no such incidents in this trip but i can never forget this one.

I live in Chennai and the other two (Nikhil and Sagar) live in Bangalore. We had planned this one for a few weeks. To meet at Bangalore and then go somewhere and do something fun. I started in the Innova, early on a saturday morning. The plan was to reach Bangalore, pick up the guys and head out to Sangam (a place where 2 rivers meet) and Barachukki falls which were around 150 Kms from Bangalore and about 40 Kms apart, and reach back to Bangalore. I picked up Nikhil at around 1 and he started listing out reasons why we should be sitting in a cinema hall and follow it up with a burger instead of starting out so late without planning any accommodation blah blah blah. Sagar was out with his cousin who had come to Bangalore, so he was out. Its a wonder how relatives manage to fly in at such crucial times. However, the trip was called off, almost. I didn't drive all the way to Bangalore on a weekend to pay for weekend premium tickets to watch some movie sad enough to be still selling tickets. So I talked Sagar into ditching his cousin. Nikhil didn't need convincing, i was driving. Change of plans. Pick up Sagar and spare clothes, drive to Sangam, pass time, drive to Barachukki, have fun, sleep in the car, wake up, drive back.

Again, i would like to mention that there was nothing crazy in this trip. It did not remind us of "Zindagi naa Milegi dobara", although we did take a few pics based on the movie poster. You could call it a "Dil chahtha hai" type of trip, minus the mercedes, and the beach, and the girls, and the boat. Anyways, there was one factor that was common in these movies and our trip, we were 3. Its a magical number. Less than 3 and there is only one conversation in which you necessarily have to participate. More than 3 and there will be multiple conversations and you are left out. When there are 3, there is still only one conversation, but you have a choice to participate. You can doze off and wake up to some keyword and join the conversation again. You are never left out and there is always a conversation in progress. 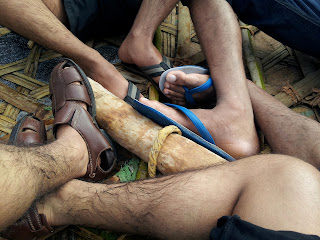 The trip was never planned to be great. Just 3 professionals taking a peaceful break from the routine weekend. But everything seemed to go our way. The weather was just fantastic, the roads and routes just perfect, safe fun in the river, playing Jhonty Rhodes in waist deep water, found a very decent place to stay the night (enter alcohol), woke up early on sunday (that is a great achievement in such a group), took a boat close enough to the waterfall to touch the water, got wet in a smaller waterfall, some very memorable pics, and the drive back to Bangalore to have tandoori for lunch.

There were these moments in between, like when i was lying in the rear seat with my feet hanging out the window, and using the window as a sunroof, singing some classic songs together, discussing non sense. At these moments there is a feeling of real satisfaction with life. Weekends like these make the troubles of the other days worth it. I forget my boss, my dad's expression when i said i'm taking the car to Bangalore, that cool new laptop which is on my wishlist for sometime, everything is gone. There are no regrets, life suddenly seems perfect. I wish this weekend never ends but i don't regret the fact that it will. I'm ready to face the world. I've recharged myself.

We always plan trips, most of the time they don't happen, other times they don't go according to plan. This was one trip where we got exactly what we wanted, a memorable break. A weekend to cherish, photos to upload, and a story to tell. There cannot be another one like it, but we still wish.........